This week, we’re so excited to be joined with a few of the cast members from Degrassi: Next Class! Instead of sharing our favourites of the week, we talked to Sara, Chelsea and Dante to see what they are currently obsessing over.

What were your faves of the week? Share with us in the comments below! 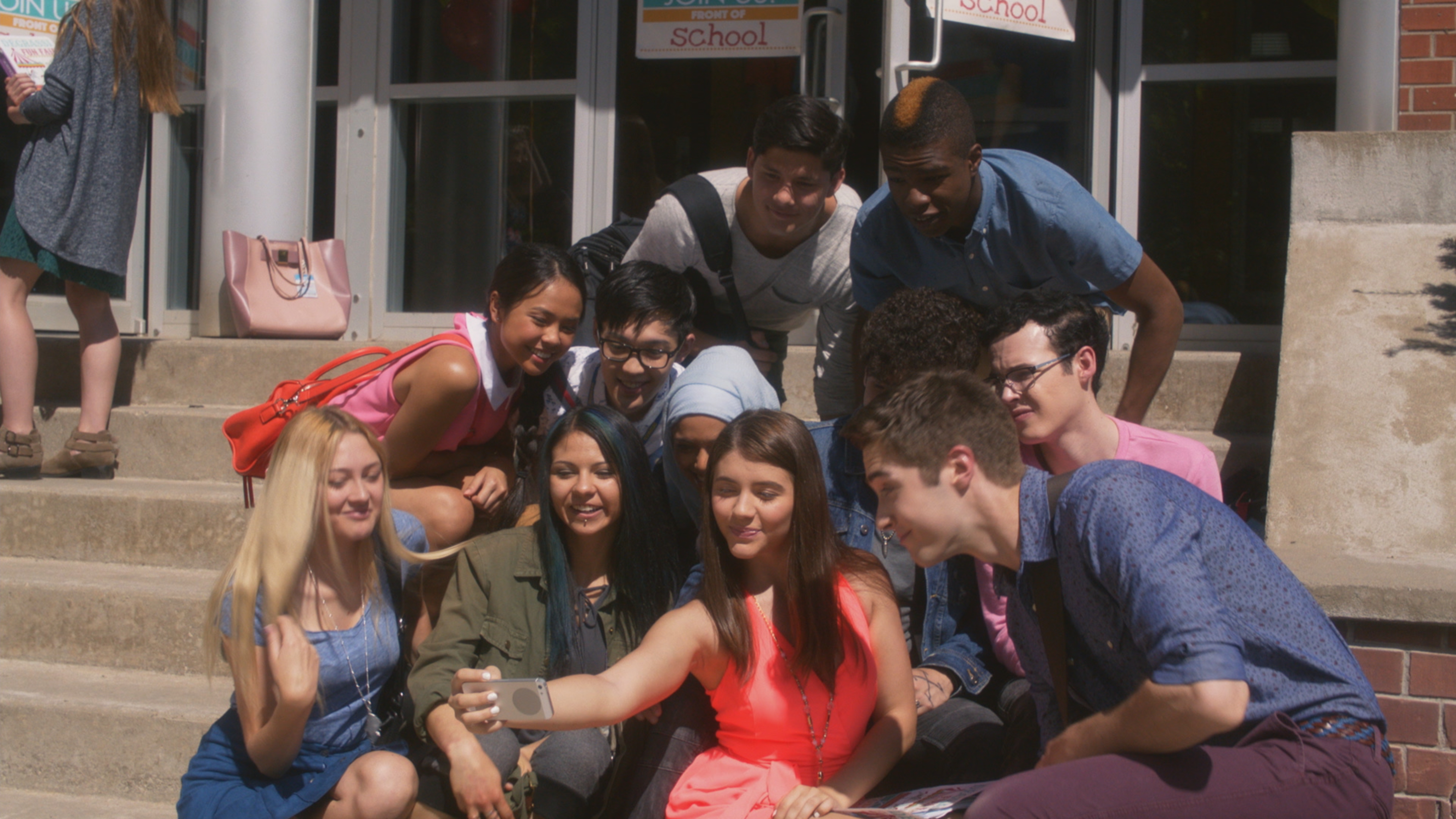 Family Channel is heading back to the classroom, bringing fans across the country a brand new season of Degrassi: Next Class. Season four of the critically acclaimed teen drama takes a look at some of the most relevant issues affecting today’s youth, exploring important topics such as mental illness, gender identity and cultural adjustment.

Catch season 4 premiering every weeknight from July 3 – July 14 at 10 p.m on Family Channel!

New to the series or miss an episode? Fans can binge the whole season on the Family Channel App, along with catching up on seasons one through three! We can’t wait to watch the rest of the season! 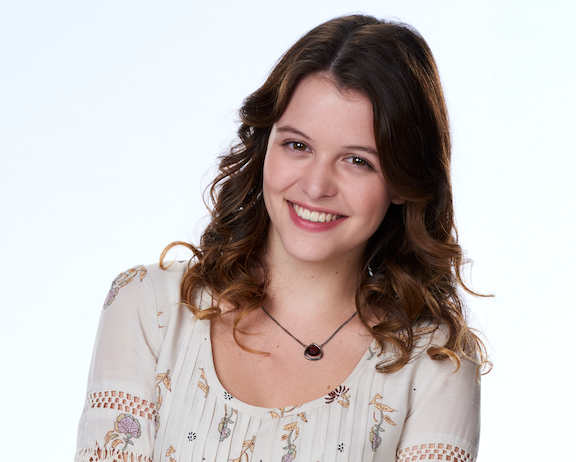 Sara made her Degrassi debut in season 13 as Miles’ younger sister Frankie. Sara’s previous television credits include The Jane Show, Watering Mister Cocoa and the role of Jordy Cooper in Overruled! She also appeared in the film Afterwards, starring Evangeline Lily and John Malkovich.  Sara is currently studying screenwriting since graduating from high school. 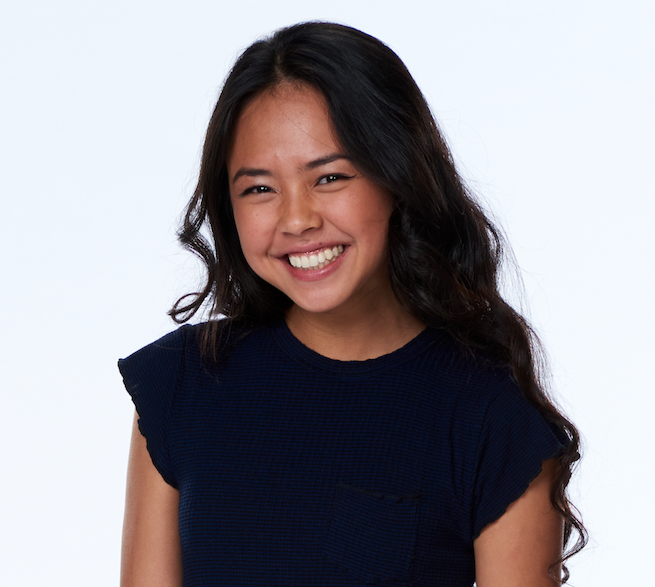 CHELSEA CLARK as Esme Song
Chelsea joined the cast of Degrassi: Next Class with a number of television credits that include Rookie Blue, The Stanley Dynamic and Life With Boys. Chelsea’s theatre credits include Beginnings (off Broadway showcase), Legally Blonde, A Christmas Carol, Bugsy Malone, Aladdin, Thoroughly Modern Millie, Willy Wonka, Once Upon a Mattress and Anne of Green Gables. 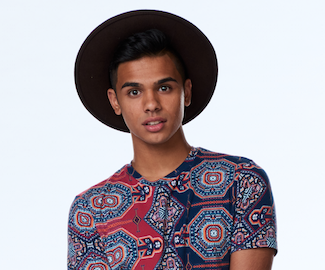 DANTE SCOTT as Vijay Miraj
Degrassi: Next Class fans will recognize Dante from the YTV show The Next Star where he was a Top 6 competitor in 2013. Dante’s stage credits include Beyond the Moon, Rock and Roll Review, Dance Fuel, The Best Christmas Pageant Ever, Annie, Beauty and the Beast, The Christmas Carol and Willy Wonka and the Chocolate Factory. Dante hails from Windsor, Ontario.

1. Favourite Degrassi episode (of any season – you don’t have to have been in it!)

Sara: My favourite Degrassi episode ever has to be the one that was inspired by The Breakfast Club. Ellie and Sean had maybe the CUTEST SCENE IN DEGRASSI HISTORY up on that rooftop and I’ve always had a soft spot in my heart for it. Plus, seeing young Drake is always fun!

Dante: My favourite episode of Degrassi is Season 2 episode 10 of Degrassi: Next Class. This episode was the season finale and I thought it left viewers dangling on the edge of a cliff. It was when the bus crash took place and I think that it was the perfect way to finish the season, as it kept everyone interested.

Chelsea: My favourite Degrassi episode was in season 14 when the musical Captain Who premieres because who doesn’t love a good musical!

Sara: My favourite moment on set is hard to choose. Every day is always so different! I can narrow it down to three. One is the day I had my first on screen kiss with Andre Kim back in 2013 – it was freezing cold and we huddled next to a heater and laughed nonstop. Another one is the day we shot the guitar smashing scene – when I walked away I could not stop smiling because it was one of the most fun things ever! And three would have to be a scene I shot with Eric in his room. I remember having so much fun and we just couldn’t stop laughing. Moral of the story: I love to laugh.

Dante: My favourite moment on set was my very first day on set. I was filming my first scene on the show with the lovely Sara Waisglass and I was so nervous! However, the constant jokes and funny stories that Sara was telling made me feel so comfortable and happy!

Chelsea: During lunches we’ll start jamming out to music and breaking out into song. It’s my favourite thing ever 🙂

Sara: Hmmm… That has to be when my entire film class went on a fieldtrip up north to shoot our final project. We bonded so much and it was perfect because it was during the final months of high school. It was the best possible way to reflect on four crazy years together.

Dante: My favourite high school moment in real life was when we threw a school carnival on the property! From games, to food, and even live music, we had it all and it was so much fun!

Chelsea: Graduation! It was awesome standing with my class in our robes, knowing we did it and finished high school together. 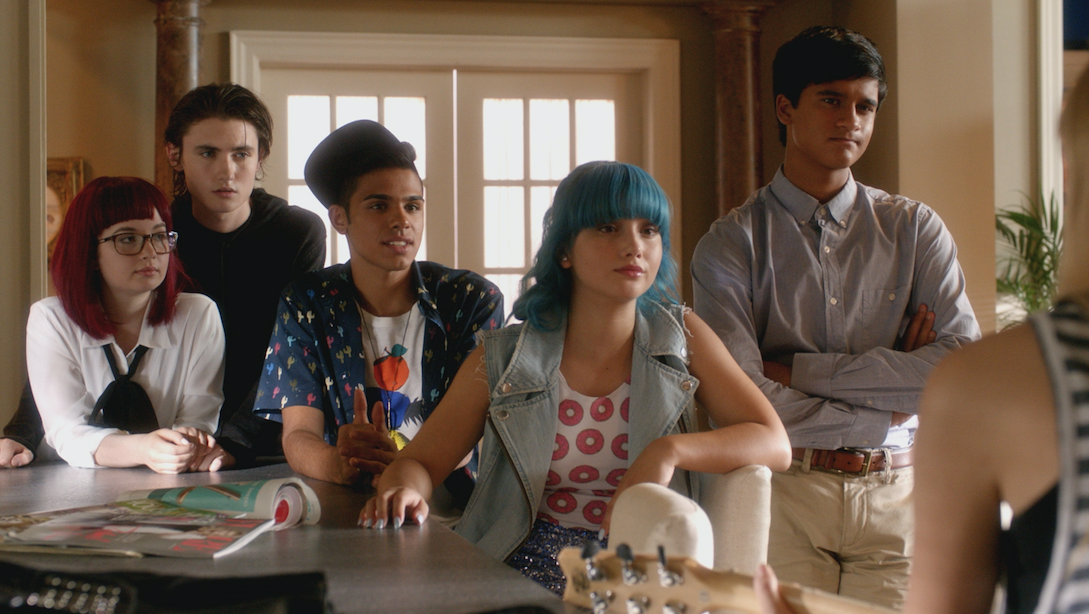 4. Fave song of the week

Dante: My favourite song this week is Most Girls by Hailee Steinfield. It is such a good song to dance to!

Chelsea: My fave song this week is Emoticons by The Wombats

5. Fave fashion trend you want to see make a comeback

Sara: Oh man I have no idea! My favourite look is an oversized t-shirt with a good pair of converse – I just like to be comfortable. Unfortunately, it’s not socially acceptable to leave the house without pants yet so I guess I’ll just have to wait for that.

Dante: A fashion trend that I would love to see come back is those circle shaped sunglasses. LOVE.

Chelsea: I’d love to see PJ’s being socially acceptable to wear during the day, because why not!

Sara: For some reason it’s those accounts that show hair transformations. Watching the stylist put in colour is mesmerizing!

Dante: I love following @arianagrande. Not only is she my favourite singer, but her aesthetic is ICONIC.

Chelsea: Not even going to lie… its @retrieverstagram. I love me some puppies!

Sara: False lashes…when I can put them on correctly!

Dante: My favourite beauty/cosmetic item is the Creamy Radiant Concealer by Nars. Girl, without this concealer I wouldn’t be able to schedule any meeting before 11:00 am. 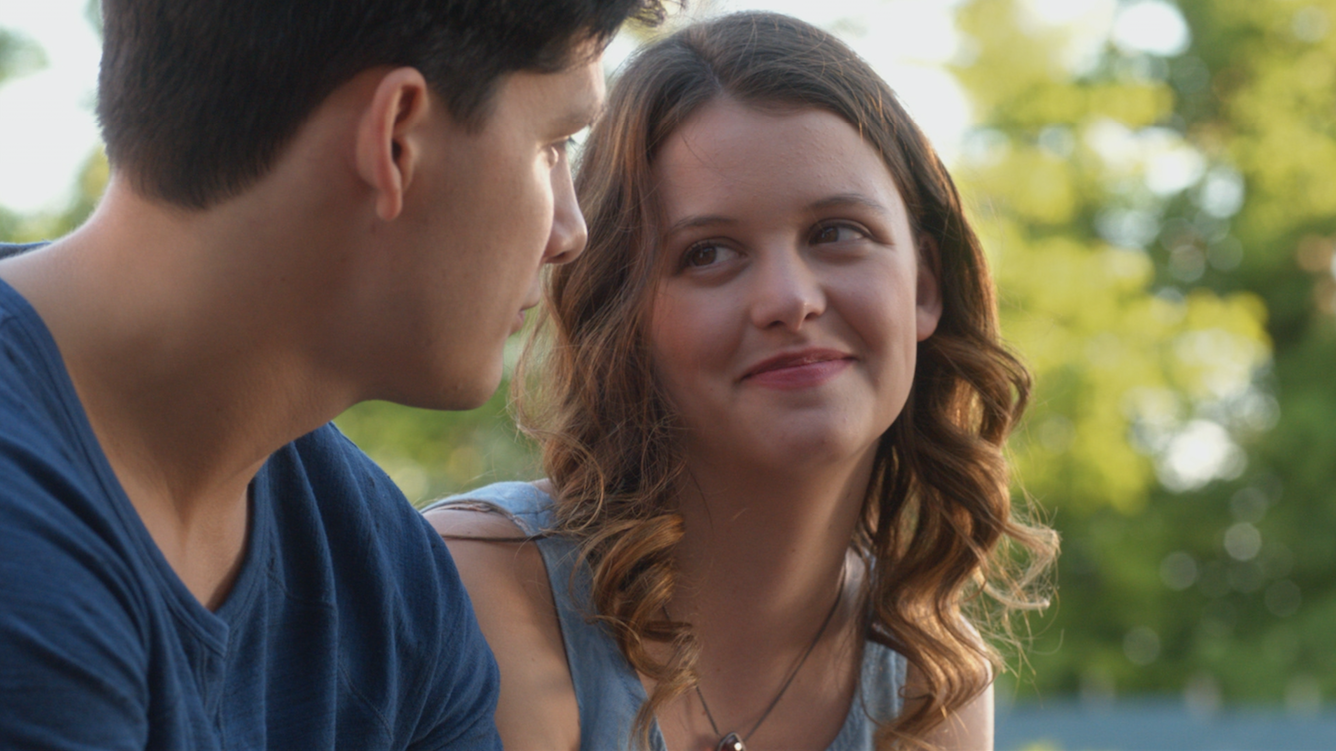 8. Favourite place in the world you’ve ever been

Sara: Antigua. It’s an island in the Caribbean and I went there with my family when I was little. It was beautiful and relaxing. I read about a thousand books while I was there!

Dante: My favourite place that I’ve been to would 100% have to be Ecuador. I travelled to the country with several of my co-cast members with the WE organization and it was such a blast. We all got to learn so much about such a different culture and it was awesome!

Chelsea: I went to London a few years ago and absolutely fell in love. I adore the history, the culture…basically everything!

9. Favourite food (what could you eat over and over again without getting sick of!)

Sara: Crepes! Ask anyone who knows me, I cannot go a week without eating a Crepe!

Dante: Chicken Parmesan. AMEN. I could eat this for days.

10. Fave part of being apart of Degrassi?

Sara: The people! I have made some of my closest friends at Degrassi – people I love like family. That and the opportunities. If it hadn’t been for Degrassi, I never would have smashed a guitar or experienced having a twin sibling. I am so lucky to be a part of it!

Dante: My fave thing about being a part of Degrassi is the messages that the show conveys. I like to think of the show as not only a form of entertainment, but also a form of education. I’m so proud to be able to be a part of something that can teach so much to viewers.

Chelsea: The people are by far my favourite part of being on Degrassi. When you join Degrassi you join a family and the Degrassi family is one I’m blessed to be part of. 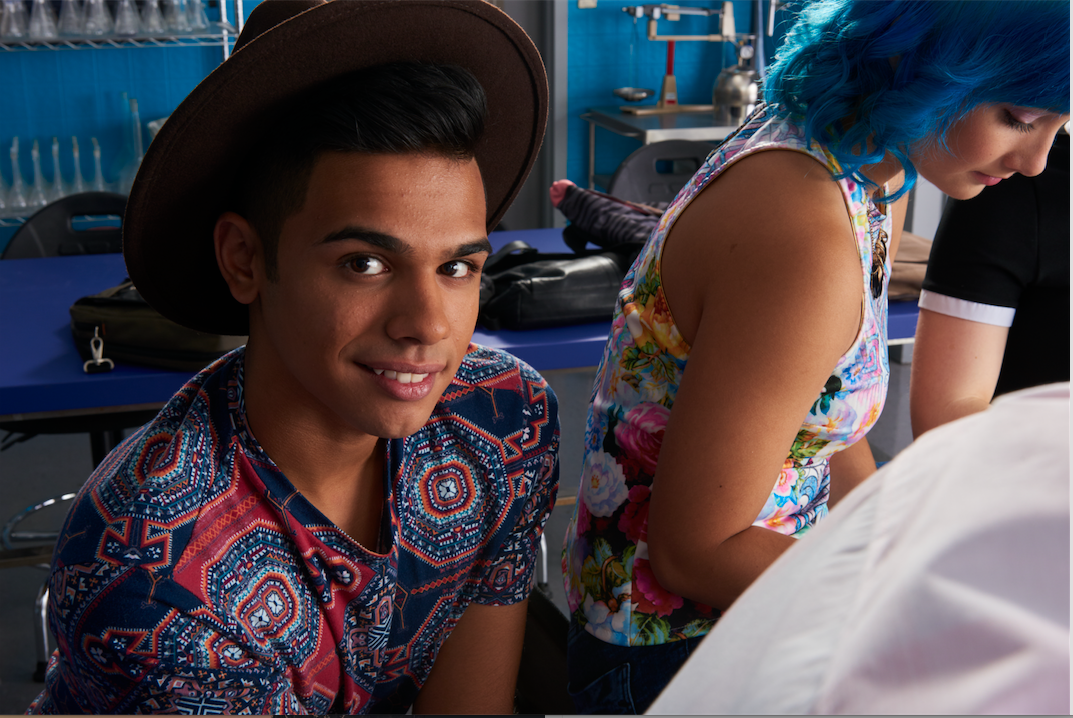 Sara: I’m obsessing over Elton John this week. The man is a lyrical genius and certified music God. His hits are timeless and I’ve been listening to them all week long!

Dante: My fave TV show right now is Rupaul’s Dragrace! I’m in love with this show. I’ve watched all 10 seasons in about a week and I must say that for those of you wondering, I am team Naomi Smalls ALL THE WAY!

Chelsea: A book! I’m reading this new one called The Discovery of Witches and I have to say it’s really good!

Thank you Sara, Dante, and Chelsea! We’re going to have to check out all of your favourites!