Believe it or not, fame doesn’t happen overnight (not the good kind anyway.) These celebrities are proof that a little hard work (even at a regular job) pays off.  Before they reached celebrity status, these famous faces did whatever it took to make ends meet in their lives before red-carpets and designer frocks.  Here is a look into the resumes of some of our favourite people in the media today.

Yes, Mr ‘Yeezy’ Kardashian West folded clothing at the famous clothing store chain G.A.P. He alludes to this part of his former life in ‘The College Dropout’ album, when he mentions “Let’s go back, back to the GAP. Look at my cheque, wasn’t no scratch. So if I stole, wasn’t my fault. Yeah I stole, never got caught.” How’s that for normalcy?

As a teenager, Eva Mendes tested out the waters in the restaurant business – she worked at several fast food restaurants including an Italian place at the local mall called Ciao, a pizzaria and a hot dog stand! Could you imagine getting served by the ever so gorgeous Eva Mendes?

This blue eyed actor once delivered refrigerators, drove exotic dancers around in a limousine and wore a chicken suit and danced around for the famous el Pollo Loco to pay the bills before reaching stardom. Pitt dropped out of university (just short of a journalism degree) in order to pursue acting in Hollywood.

While working in the children’s department at Higbee’s Department Store, Halle studied broadcast journalism and paid her way through college. After winning numerous beauty contests, she moved to NY to pursue acting. However, that dream was temporarily crushed and it is rumoured that she lived in a homeless shelter for some time before making it big – now that’s a humble beginning to a great career!

Blood, sweat and tears – literally! While Ashton studied biomedical engineering at the University of Iowa he swept cereal dust at a General Mills factory to offset the living expenses. He also sold his BLOOD to bring in some extra cash – imagine? Someone somewhere has Ashton’s blood running through their veins!

Rachel worked at McDonald’s for three years while on summer break from school, she must have been a loyal Mc D’s employee to hold down that job for so long – who would have thought a young celeb would be bagging up your meal combo! Make sure to pay close attention to that drive-thru window next time, because you never know… 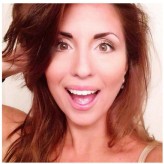